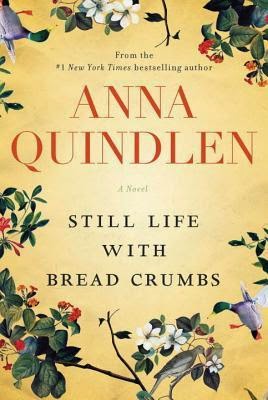 Publisher's Summary:
Still Life with Bread Crumbs begins with an imagined gunshot and ends with a new tin roof. Between the two is a wry and knowing portrait of Rebecca Winter, a photographer whose work made her an unlikely heroine for many women. Her career is now descendent, her bank balance shaky, and she has fled the city for the middle of nowhere. There she discovers, in a tree stand with a roofer named Jim Bates, that what she sees through a camera lens is not all there is to life.

Brilliantly written, powerfully observed, Still Life with Bread Crumbs is a deeply moving and often very funny story of unexpected love, and a stunningly crafted journey into the life of a woman, her heart, her mind, her days, as she discovers that life is a story with many levels, a story that is longer and more exciting than she ever imagined.

Quick thoughts:
Anna Quindlen and I go way back. From her early columns and essays, to those first few novels, and most recently her nonfiction title Lots of Candles, Plenty of Cake, she now seems like an old friend... and any new novel she writes becomes irresistible.

Still Life with Bread Crumbs got off to a slow start for me, but it was refreshing to see an older heroine (Rebecca is 60). I also loved the upstate New York setting. Like many readers, I'm drawn to novels set close to home and Quindlen nails life in this small town.

Rebecca's story is "deeply moving and often very funny" as promised, but the writing is the true star of this novel. These quotes will linger in my mind long after memories of the story have faded.


There are two kinds of men: men who want a wife who is predictable, and men who want a wife who is exotic. For some reason, Peter had thought she was the latter. But even if that had been the case, the problem inherent remains the same -- once she becomes a wife, the exotic becomes familiar, and thus predictable, and thus not what was wanted at all. Those few women who stayed exotic usually were considered, after a few years, to be crazy.  page 104

... she realized she'd been becoming different people for as long as she could remember but had never really noticed, or had put it down to moods, or marriage, or motherhood. The problem was that she'd thought that at a certain point she would be a finished product. Now she wasn't sure what that might be, especially when she considered how sure she had been about it at various times in the past, and how wrong she'd been.  page 223

Her marriage had been like a new silk dress, so beautiful and undulating, except that after a while the edges of the sleeves gray, there is a spot of wine, the hem drags. If her love affair with Peter had stopped after six months it would have been a gorgeous memorable thing. But in love no one ever leaves well enough alone, and so it settles into a strange unsatisfactory kind of friendship or sours into mutual recriminations and regret, the dress pushed to the back of the closet, limp and so unnew, embalmed in plastic because of what it once was.  page 124

Bottom line:
Still Life with Bread Crumbs is a good story with great writing, but I definitely prefer Quindlen's nonfiction.
Posted by JoAnn at 7:38 AM