Dept. of Speculation by Jenny Offill 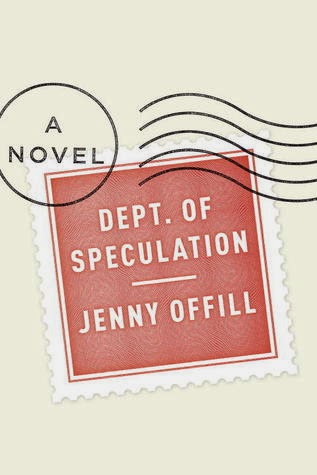 Dept. of Speculation
by Jenny Offill
Knopf, 2014
192 pages
source: borrowed from the library

Summary (from goodreads):
Dept. of Speculation is a portrait of a marriage. It is also a beguiling rumination on the mysteries of intimacy, trust, faith, knowledge, and the condition of universal shipwreck that unites us all.

Jenny Offill’s heroine, referred to in these pages as simply “the wife,” once exchanged love letters with her husband postmarked Dept. of Speculation, their code name for all the uncertainty that inheres in life and in the strangely fluid confines of a long relationship. As they confront an array of common catastrophes—a colicky baby, a faltering marriage, stalled ambitions—the wife analyzes her predicament, invoking everything from Keats and Kafka to the thought experiments of the Stoics to the lessons of doomed Russian cosmonauts. She muses on the consuming, capacious experience of maternal love, and the near total destruction of the self that ensues from it as she confronts the friction between domestic life and the seductions and demands of art.

With cool precision, in language that shimmers with rage and wit and fierce longing, Jenny Offill has crafted an exquisitely suspenseful love story that has the velocity of a train hurtling through the night at top speed. Exceptionally lean and compact, Dept. of Speculation is a novel to be devoured in a single sitting, though its bracing emotional insights and piercing meditations on despair and love will linger long after the last page.


My thoughts:
I'm pretty conventional in my reading choices and tend to shy away from anything even vaguely experimental. Still, I know it's good to get out of my comfort zone every once in a while and Dept. of Speculation certainly flirted with its edges.

The story is actually a series of short, seemingly disjointed paragraphs that, when taken as a whole, tell the story of a relationship. No names are used, the characters are simply the man, the wife, the child, etc. The novel is clever and innovative - even the abbreviation in the title hints at its style.

The beginning, especially, seemed odd and choppy, but as I grew accustomed to the style it became more enjoyable. This is a very short novel that can be read in a single sitting, but I liked returning to it a few times over a couple of days. I also (surprisingly) found myself thinking about it in between times.

While I may not have appreciated this novel as much as other readers, I marveled at its beauty, simplicity and creativity. I do recommend Dept. of Speculation... at least borrow it from the library and see what you think.