Tuesday Intro: Among the Janeites by Deborah Yaffe 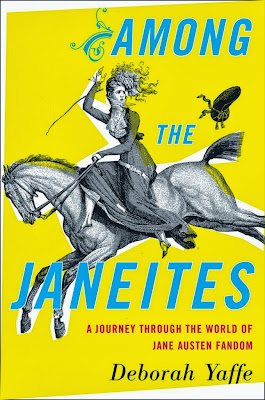 The bottom drawers of Baronda Bradley's dresser are filled to overflowing with kid gloves, ballet slippers, stockings, feathers, lace collars, nineteenth-century coins, smelling salts, period playing cards, drawstring reticules, a vintage sewing kit - all the accessories with which she augments the breathtaking Regency outfits she wears to each year's Annual General Meeting of the Jane Austen Society of North America. A walk-in closet holds her thirty size 6 gowns - the green-and-orange with striped silk overlay, which premiered in Seattle in 2001; the flowered silk brocade day dress, from Los Angeles in 2004; the square-necked pale-pink georgette with hand-embroidered bodice; the dark red with cutout sleeves and matching long velvet coat; the lace and silk confection so daringly low-cut that, at the Vancouver ball in 2007, she armed her friends with a code word ("Shakespeare!") to deploy if they noticed a hint of areola peeking out.


Among the Janeites: A Journey Through the World of Jane Austen Fandom
by Deborah Yaffe
Houghton Mifflin Harcourt, 2013
277 pages

Today I'm featuring a review book I plan to begin later this week. Even though I don't dress in costume or attend JASNA events (yet), I still consider myself a Janeite and identify with the publisher's target audience:


For anyone who has ever loved a Jane Austen novel, a warm and witty look at the passionate, thriving world of Austen fandom.

They walk among us in their bonnets and Empire-waist gowns, clutching their souvenir tote bags and battered paperbacks: the Janeites, Jane Austen’s legion of devoted fans. Who are these obsessed admirers, whose passion has transformed Austen from classic novelist to pop-culture phenomenon? Deborah Yaffe, journalist and Janeite, sets out to answer this question, exploring the remarkable endurance of Austen’s stories, the unusual zeal that their author inspires, and the striking cross-section of lives she has touched.

Along the way, Yaffe meets a Florida lawyer with a byzantine theory about hidden subtexts in the novels, a writer of Austen fan fiction who found her own Mr. Darcy while reimagining Pride and Prejudice, and a lit professor whose roller-derby nom de skate is Stone Cold Jane Austen. Yaffe goes where Janeites gather, joining a pilgrimage to historic sites in Britain, chatting online with fellow fans, and attending the annual ball of the Jane Austen Society of North America—in period costume. Part chronicle of a vibrant literary community, part memoir of a lifelong love, Among the Janeites is a funny, touching meditation on the nature of fandom.

Do you consider yourself a Janeite? Does the opening paragraph appeal to you? I think this book sounds like a lot of fun.

Email ThisBlogThis!Share to TwitterShare to FacebookShare to Pinterest
Labels: Jane Austen, nonfiction, Quote of the Week