Tuesday Intro: The Age of Innocence 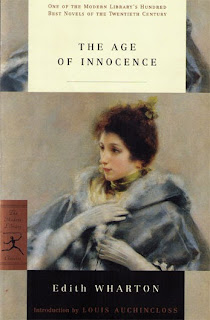 On a January evening of the early seventies, Christine Nilsson was singing in Faust at the Academy of Music in New York.

Though there was already talk of the erection, in remote metropolitan distances "above the forties", of a new Opera House which should compete in costliness and splendor with those of the great European capitals, the world of fashion was still content to reassemble every winter in the shabby red and gold boxes of the sociable old Academy. Conservatives cherished it for being small and inconvenient, and thus keeping out the "new people" whom New York was beginning to dread and yet be drawn to; and the sentimental clung to it for its historic associations, and the musical for its excellent acoustics, always so problematic a quality in halls built for the hearing of music.

The Age of Innocence
by Edith Wharton

I've considered myself an Edith Wharton fan for years, but have somehow put off reading her masterpiece until now. The Age of Innocence, winner of the Pulitzer Prize in 1921, has swept me away into the glamorous world of Old New York. I'm happy to be reading with Audrey and hope we can coordinate a visit to The Mount sometime this fall.

What do you think of the opening paragraphs? Would you keep reading?

Every Tuesday, Diane at Bibliophile by the Sea posts the opening paragraph (sometime two) of a book she decided to read based on the opening. Feel free to grab the banner and play along.
Posted by JoAnn at 9:55 AM

Email ThisBlogThis!Share to TwitterShare to FacebookShare to Pinterest
Labels: classics, Edith Wharton, Quote of the Week