Tuesday Intro: Half of a Yellow Sun 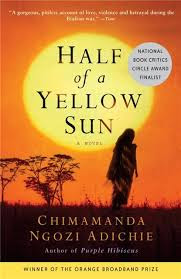 Master was a little crazy: he had spent too many years reading books overseas, talked to himself in his office, did not always return greetings, and had too much hair. Ugwu's aunty said this in a low voice as they walked on the path. "But he is a good man," she added. "As long as you work well, you will eat well. You will even eat meat every day." She stopped to spit; the saliva left her mouth with a sucking sound and landed on the grass.

Ugwu did not believe that anybody, not even this master he was going to live with, ate meat every day. He did not disagree with his aunty, though, because he was too choked with expectation, too busy imagining his new life away from the village. They had been walking for a while now, since they got off the lory at the motor park, and the afternoon sun burned the back of his neck. But he did not mind. He was prepared to walk hours more in even hotter sun. He had never seen anything like the streets that appeared after they went past the university gates, streets so smooth and tarred that he itched to lay his cheek down on them.He would never be able to describe to his sister Anulika how the bungalows here were painted the color of the sky and sat side by side like polite well-dressed men, how the hedges separating them were trimmed so flat on top that they looked like tables wrapped with leaves."

Half of a Yellow Sun
by Chimamanda Ngozi Adichie

I started this book over a week ago for The Backlist Book Club, but have read only 60 pages. The writing is wonderful, the story is interesting, and although I have had little time to read, I still hope to finish before the end of the month.

What do you think of the opening paragraphs? Would you keep reading?

Every Tuesday, Diane at Bibliophile by the Sea posts the opening paragraph (sometime two) of a book she decided to read based on the opening. Feel free to grab the banner and play along.
Posted by JoAnn at 7:40 AM