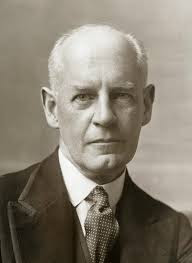 It's the birthday of Nobel laureate John Galsworthy (books by this author), born in Surrey, England (1867). He's the author of the Forsyte Saga, a series of novels that satirically portray British upper-middle-class families.

He won the Nobel Prize in literature in 1932, and he used the prize money to help establish an international organization for writers, PEN. It's an acronym they chose for the group after someone pointed out that the words for "Poet," for "Essayist," and for "Novelist" in most European languages have the same initial letters (P-E-N). He refused knighthood, saying that he didn't think that writers should take titles. In 1967, his Forsyte Saga was adapted into a BBC TV mini-series, which was hugely popular in England. 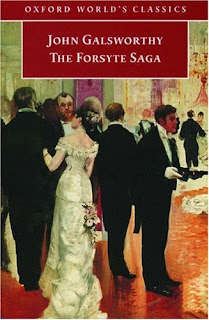 I remember reading The Forsyte Saga over the course of one snowy week in January 2004, when PBS's Masterpiece Theater was rebroadcasting the season 1 mini-series prior to unveiling season 2. It was a reading experience that stands out just as much as the novel itself. The snow fell continuously, the wind howled, the roads were treacherous... and I sat by the fire, drinking endless cups of tea, lost in the drama of late Victorian and Edwardian England. It was bliss.

After reading The Writer's Almanac and remembering how enjoyable the novels were, I searched amazon and found the complete collection - all 9 novels and 4 interludes, and 2650 pages - for just 99 cents. I plan to "Buy now with 1-Click" momentarily.

While poking around, I also found this 2012 article from the New York Times  describing The Forstye Saga series as "the bodice-ripper that started it all". The "it", of course, being Downton Abbey. [Currently 144 days, 12 hours, and 4 minutes until season 4 premiers in the US]

Have you read The Forsyte Saga  or watched the series? If you're a die-hard Downton fan like me, it might be a good project for the next 144 days. 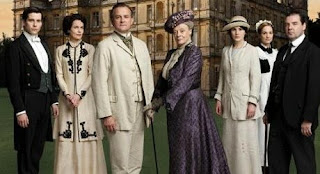 photo credit
Posted by JoAnn at 9:15 AM