It's been more than a decade since I last made stuffed peppers - probably because my husband doesn't love them and at least one of the girls was going through a picky eating phase - but when this recipe for turkey stuffed peppers popped up on Pinterest (via skinnytaste.com), I knew it was time to try again.

Using a combination of red and orange peppers, wild rice, and choosing cilantro over parsley when given the option, I followed the recipe exactly as written. The rice was prepared ahead to cut down on prep time. 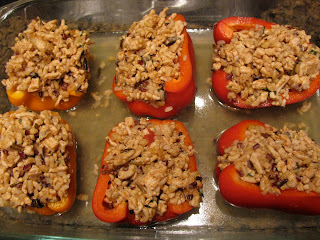 ready for the oven

Paired with a spinach salad, this was an easy meal, but slightly bland. It tasted better after adding some salt and pepper. The next time I may even splash on the hot sauce! 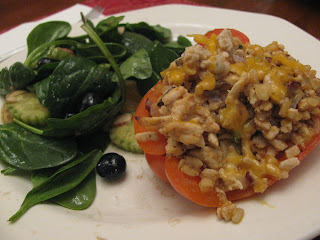 Weekend Cooking, hosted at Beth Fish Reads, is open to anyone who has a food-related post to share: Book (novel, nonfiction) reviews, cookbook reviews, movie reviews, recipes, random thoughts, gadgets, fabulous quotations, photographs. If your post is even vaguely foodie, feel free to grab the button and link up over the weekend.
Posted by JoAnn at 10:39 AM