The Girl in the Green Raincoat by Laura Lippman 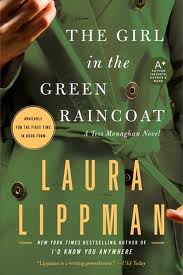 The Girl in the Green Raincoat: A Tess Monaghan Novel
by Laura Lippman
William Morrow Paperbacks, 2011

In the third trimester of her pregnancy, Baltimore private investigator Tess Monaghan is under doctor's orders to remain immobile. Bored and restless, reduced to watching the world go by outside her window, she takes small comfort in the mundane events she observes... like the young woman in a green raincoat who walks her dog at the same time every day. Then one day the dog is running free and its owner is nowhere to be seen.

Certain that something is terribly wrong, and incapable of leaving well enough alone, Tess is determined to get to the bottom of the dog walker's abrupt disappearance, even if she must do so from her own bedroom. But her inquisitiveness is about to fling open a dangerous Pandora's box of past crimes and troubling deaths . . . and she's not only putting her own life in jeopardy but also her unborn child's.

After reading What the Dead Know  in 2011, Laura Lippman became one of my favorite mystery writers. Her latest book, The Girl in the Green Raincoat, was previously serialized in the New York Times and has been called a "masterful Hitchcockian thriller from one of the very best in the business".

I'm usually pretty compulsive when it comes to reading series in order, but had heard this novella can stand on its own. While that is certainly true, I would have appreciated it even more if I'd already 'known' Tess and understood her history.

Still, this was a very well-written mystery that makes me want to go back and start at the beginning (Baltimore Blues).