A Poem for Monday 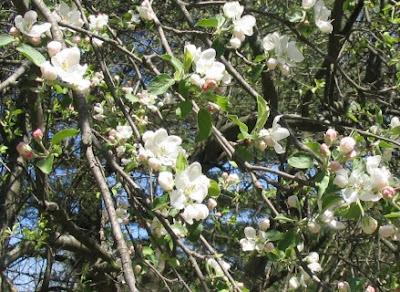 "A Prayer in Spring"  by Robert Frost

Oh, give us pleasure in the flowers today;
And give us not to think so far away
As the uncertain harvest; keep us here
All simply in the springing of the year.

Oh, give us pleasure in the orchard white,
Like nothing else by day, like ghosts by night;
And make us happy in the happy bees,
The swarm dilating round the perfect trees.

And make us happy in the darting bird
That suddenly above the bees is heard,
The meteor that thrusts in with needle bill,
And off a blossom in mid air stands still.

For this is love and nothing else is love,
The which it is reserved for God above
To sanctify to what far ends He will,
But which it only needs that we fulfill.


It's the birthday of Robert Frost (1874) (books by this author). Born in San Francisco, he moved to Massachusetts when he was 11. He struggled a long time to become a successful poet. His style was out of fashion almost from the beginning — he was interested in the traditional forms of rhyme and meter, while his contemporaries such as Ezra Pound, William Carlos Williams, and T. S. Eliot were writing in modern free verse.

His early years were often rough. His father was a heavy drinker and died of tuberculosis when Frost was twelve years old, leaving the family impoverished. He had to drop out of college during his first year to work, and tried unsuccessfully to publish poetry. Frost was seriously depressed; at one point he followed a trail into the Dismal Swamp and considered drowning himself. He walked all night through the swamp, but something made him decide to head back home. He worked as teacher for a few years, but he never enjoyed it. Then, in 1900, he and his wife, Elinor, lost their first child. He fell into despair. That year, Frost tried his hand at raising poultry on 30-acre farm after his grandfather took pity on him and bought him a farm in Derry, New Hampshire, in hopes that it would give him a steady income. The experience shaped his poetic voice and provided inspiration for his most popular later poems, but he was a terrible farmer. In a letter to a friend, Frost wrote, "The only thing we had was time and seclusion."

He was 39 when he published his first collection of poems, A Boy's Will (1913), and it was a major success.