Tuesday Intro: A Visit From the Goon Squad 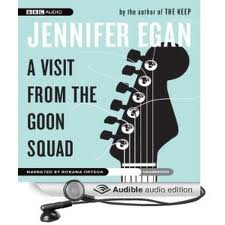 It began in the usual way, in the bathroom of the Lassimo Hotel. Sasha was adjusting her yellow eye shadow in the mirror when she noticed a bag on the floor beside the sink that must have belonged to the woman whose peeing she could faintly hear through the vaultlike door of a toilet stall. Inside the rim of the bag, barely visible, was a wallet made of pale green leather. It was easy for Sasha  to recognize, looking back, that the peeing woman's blind trust had provoked her: We live in a city where people will steal the hair off your head if you give them half a chance, but you leave your stuff lying in plain sight and expect it tot be waiting for you when you come back? It made her want to teach the woman a lesson. But this wish only camouflaged the deeper feeling Sasha always had: that fat, tender wallet, offering itself to her hand -it seemed so dull, so life-as-usual to just leave it there rather than seize the moment, take the leap, fly the coop, throw caution to the wind, live dangerously ("I get it," Coz, her therapist, said), and take the fucking thing.

A Visit From the Goon Squad
by Jennifer Egan

I've decided to try a combination read/listen strategy with our next book club selection. Reactions to A Visit From the Goon Squad  have been mixed among my blogging friends, but Sandy's audio review made me curious. With several hours of driving scheduled last weekend, I decided to begin by listening. The book jumps around in time and its focus keeps shifting between several different characters, yet I find myself fully invested - very surprising!