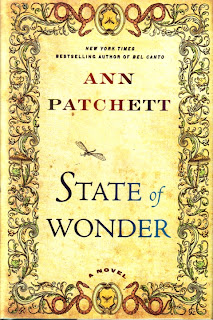 It has been months since I listened to State of Wonder by Ann Patchett, and last week I finally had a chance to discuss it with my book club. The note I scrawled to myself after finishing said, "Great story, beautiful language, and engaging narrator. It doesn't get much better - 4.5/5 stars." The finer plot details had started to fade, but I remembered enough to actively participate in the discussion.

We met at the local coffee shop, which is the equivalent of our community's living room. Normally, we rotate hostess duties and move to a public space during the winter when snowbanks can make parking a challenge. Obviously, that hasn't been a concern this year, but we stuck to our routine anyway.

In case you're interested, here's a brief plot description (from amazon):


Dr. Marina Singh, a research scientist with a Minnesota pharmaceutical company, is sent to Brazil to track down her former mentor, Dr. Annick Swenson, who seems to have all but disappeared in the Amazon while working on what is destined to be an extremely valuable new drug, the development of which has already cost the company a fortune. Nothing about Marina's assignment is easy: not only does no one know where Dr. Swenson is, but the last person who was sent to find her, Marina's research partner Anders Eckman, died before he could complete his mission. Plagued by trepidation, Marina embarks on an odyssey into the insect-infested jungle in hopes of finding her former mentor as well as answers to several troubling questions about her friend's death, the state of her company's future, and her own past.

Seven of us gathered at 10AM, grabbed a coffee, and sat down to share our thoughts. Six had finished the book and one abandoned it after just ten pages.


We began by discussing the basic believability of the plot. Several of us have worked in healthcare, research, or the pharmaceutical industry and found the basic tenets plausible enough. Many elements, however, did seem far-fetched and one member felt like she was watching a movie as she read. We all agreed the book would make a great movie!

We spent a good deal of time discussing the impact of research on the native population and vegetation, and research ethics in general. We also talked about Marina's relationship with her boss/lover (Why did she keep referring to him as "Mr. Fox"?) and with Dr. Swenson. The title of the book puzzled us. Why State of Wonder? Who really experienced a state of wonder? We never did reach a consensus on that point.

Most of us have read several of Patchett's novels and a few proclaimed this to be there favorite. One member had only read Bel Canto (which she didn't like) and was pleasantly surprised by State of Wonder. I have read all of Patchett's books and still list The Magician's Assistant as my favorite, but consider State of Wonder to be one of her best.

Overall, everyone that finished the book enjoyed it. I liked it slightly more than the others, and think the audio experience may have been responsible.

Next up: A Visit From The Goon Squad by Jennifer Egan. I've been avoiding this book for quite some time and have decided to approach it as a read/listen combination. We'll see how it goes.