Tuesday Intros: The Elegance of the Hedgehog 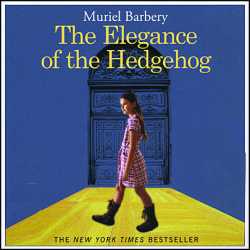 My name is Renée. I am fifty-four years old. For twenty-seven years I have been the concierge at number 7, rue de Grenelle, a fine hôtel particulier with a courtyard and private gardens, divided into eight luxury apartments, all of which are inhabited, all of which are immense. I am a widow, I am short, ugly, and plump, I have bunions on my feet and, if I am to credit certain early mornings of self-inflicted disgust, the breath of a mammoth. I did not go to college, I have always been poor, discreet, and insignificant. I live alone with my cat, a big lazy tom who has no distinguishing features other than the fact that his paws smell bad when he is annoyed. Neither he nor I make any effort to take part in the social doings of our respective kindred species. Because I am rarely friendly— though always polite— I am not liked, but am tolerated nonetheless: I correspond so very well to what social prejudice has collectively construed to be a typical French concierge that I am one of the multiple cogs that make the great universal illusion turn, the illusion according to which life has a meaning that can be easily deciphered. And since it has been written somewhere that concierges are old, ugly and sour, so has it been branded in fiery letters on the pediment of that same imbecilic firmament that the aforementioned concierges have rather large dithering cats who sleep all day on cushions that have been covered with crocheted cases.

Similarly, it has been decreed that concierges watch television interminably while their rather large cats doze, and that the entrance to the building must smell of pot-au-feu, cabbage soup, or a country-style cassoulet. I have the extraordinary good fortune to be the concierge of a very high-class sort of building. It was so humiliating for me to have to cook such loathsome dishes that when Monsieur de Broglie - the State Councilor on the first floor- intervened (an intervention he described to his wife as being "courteous but firm," whose only intention was to rid our communal habitat of such plebeian effluvia), it came as an immense relief, one I concealed as best I could beneath an expression of reluctant compliance.


The Elegance of the Hedgehog
by Muriel Barbery

Blogger opinion has been divided over The Elegance of the Hedgehog, so I am approaching it with some trepidation. It does seem to be agreed that the audio version, with its dual narrators, is the better choice. This is definitely a novel of ideas. After three CD's, the plot is nearly nonexistent but, so far, it's a nice change of pace.