The Language of Baklava by Diana Abu-Jaber 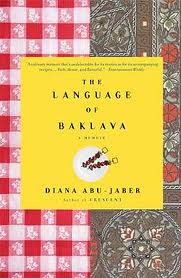 The Language of Baklava
By Diana Abu-Jaber
Anchor Books, 2006
330 pages

Publisher's summary:
Diana Abu-Jaber’s vibrant, humorous memoir weaves together stories of being raised by a food-obsessed Jordanian father with tales of Lake Ontario shish kabob cookouts and goat stew feasts under Bedouin tents in the desert. These sensuously evoked repasts, complete with recipes, in turn illuminate the two cultures of Diana's childhood–American and Jordanian–while helping to paint a loving and complex portrait of her impractical, displaced immigrant father who, like many an immigrant before him, cooked to remember the place he came from and to pass that connection on to his children. The Language of Baklava irresistably invites us to sit down at the table with Diana’s family, sharing unforgettable meals that turn out to be as much about “grace, difference, faith, love” as they are about food.

My thoughts:
Food, arguably the most outward expression of culture, was an essential part of Diana Abu-Jaber's childhood. With a Jordanian father and American mother, she grew up straddling two cultures. Food was at the heart of family tradition and ritual, especially for her father. Most important events, lessons, and memories revolved around food.

Abu-Jaber writes with humor, warmth, and obvious love for her family. Her father's fixation on Jordanian foods and rituals reminded me of my own Italian-immigrant grandparents. Surely the desire to preserve food traditions for future generations exists in all cultures.

The familiar setting, Syracuse and Central NY, also contributed to my personal enjoyment. I have visited the same parks, eaten in the same restaurants, and survived the same brutal winters.

Recipes are included with each chapter - an added bonus! I'll be trying the Peaceful Vegetarian Lentil Soup, "Start the Party" Hummus, and Diplomatic Magloubeh. For the Very Fried Falafels, however, I will happily make another trip to King David's restaurant.


"Making shish kabob always reminds the brothers of who they used to be - the heat, the spices, the preparation for cooking, and the rituals for eating were all the same as when they were children, eating at their parents' big table. But trying to kill the lamb showed them: They were no longer who they thought they were." p.19

"So now what did I just do?'
"You ate some baklawa?'
She curls her hand as if making a point so essential, it can be held only in the tips of the fingers. "I looked, I tasted, I spoke kindly and truthfully. I invited. You know what else? I keep doing it. I don't stop if that doesn't work on the first or second or third try. And like that!" She snaps the apron from the chair into the air, leaving a poof of flour like a wish. "There is your peace." p. 190

Bottom line:
The Language of Baklava is one of the best culinary memoirs I've read in quite some time. 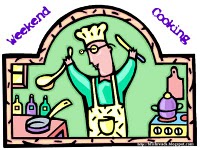 Weekend Cooking, hosted at Beth Fish Reads, is open to anyone who has any kind of food-related post to share: Book (novel, nonfiction) reviews, cookbook reviews, movie reviews, recipes, random thoughts, gadgets, fabulous quotations, photographs. If your post is even vaguely foodie, feel free to grab the button and link up over the weekend.