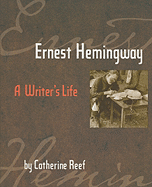 There are times when I love to lose myself in a big, fat literary biography, but then there are others that call for a more concise, compact volume. I was recently seeking the latter and Ernest Hemingway: A Writer's Life by Catherine Reef filled the need perfectly.

My April reading plans include A Moveable Feast, and Molly's review planted the idea that a better understanding of Hemingway's life might increase my appreciation of the book. A few days later, I came across Diane's review of Ernest Hemingway: A Writer's Life, and then happily discovered the library had an available copy.

Prior to reading this biography, my knowledge of Hemigway's life consisted of these key facts:
While aimed at 9-12 year-olds (I think that range is a little too young), Reef's 150-page book was exactly what I needed to fill in the gaps. I learned more about Hemingway's childhood, time in Paris, hunting and fishing expeditions, war experience, writing career, marital turmoil, and the mental illness that eventually lead to taking his own life.

... Grace [Hemingway's mother] handed Ernest a cold, careful, cruel letter that compared a mother's love to money in a bank, which could be counted and spent. A mother draws from a limited amount of love as she cares for her son through childhood, Grace explained. It was up to the son, as he grew older, to make deposits in the account through good behavior and tokens of affection, to prevent her love from running out. (page 41)

Ernest admitted he would go on loving Hadley [his first wife] "for a little while at least." He had begun to foresee the changes that marriage would bring and to mourn the loss of fishing trips with his pals. A "guy loves a couple or three streams all his life and loves 'em better than anything in the world - falls in love with a girl and the goddam streams can dry up for all he cares," he lamented to Bill Smith. "Only the hell of it is that country has as bad a hold on me as ever." (pages 45 - 46)

He practiced his art in the most basic way he knew, telling himself, "all you have to do is write one true sentence. Write the truest sentence that you know." ... He crafted paragraphs from these honest statements, making every word count. He believed that if he did his job right, then readers would understand the emotions that lay beneath the actions he described. (pages 48-49)

"There is no flesh whatever to his writing, no softness, no roundness, no color, no flow of muscle under the skin," observed Fanny Butcher, a leading literary critic, in 1929. "There is nothing but uncompromising bone." (page 6)

My husband's grandmother, author of two novels published in the 1930's, was acquainted with Hemingway and, according to family lore, "didn't think much of him". He may not have been a particularly likable person, but this book provided an interesting look at the man behind the classic novels.

Bottom line: Highly recommended, even if you're not planning to read A Moveable Feast anytime soon.