Interpreter of Maladies: an audio review 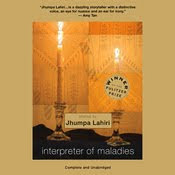 I primarily listen to audiobooks when I'm alone in the car, but with sixteen year old twins learning to drive this summer, there has been very little of that! I listened to Interpreter of Maladies back in May, and hadn't even attempted to start another until a few days ago (Little Bee by Chris Cleave). However, I didn't want fall to begin without at least mentioning this book.

Interpreter of Maladies, published in 1999, is a collection of nine short stories that won the Pulitzer Prize in 2000. I chose to listen because it was offered in a 3-for-2 promotion at audible.com, and I was so taken with Lahiri's more recent collection, Unaccustomed Earth.

The stories are set in India or the US and, again, involve characters of Indian descent. Lahiri packs so much emotion and feeling into each story. In "A Temporary Matter", an especially poignant story, we observe a young couple whose marriage is disintegrating after the birth of a still born child.

"When Mr. Pirzada Came to Dine" is told through they eyes of a young girl. It spotlights a Pakistani man in the US, a frequent dinner guest in her household, who watches a civil war unfold, night after night, on her living room television while his wife and seven daughters remain at home in Pakistan.

The title story, "Interpreter of Maladies", is set in India. Mr Kapasi works as a translator for a doctor who is unable speak the language of some of his patients. He supplements his income by acting as a driver for tourists. One day, he develops an 'interest' in a young American woman of Indian descent traveling with her husband and three children. As he imagines their relationship, she misunderstands his primary job and begins to confide her unhappiness to him. A very touching story...

The reader did a very good job in this production, however I did find some of the musical interludes annoying. Overall, I was impressed with Lahiri's writing and enjoyed listening to this collection. However, I liked Unaccustomed Earth even better.
Posted by JoAnn at 10:00 AM