Brooklyn: A Novel by Colm Toibin 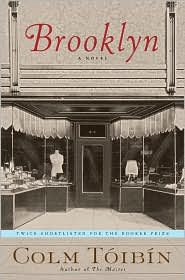 Brooklyn: A Novel
By Colm Toibin
Blackstone Audiobooks, 2009
7 hours 37 minutes
Narrated by Kristen Potter
Summary:
It's 1950's Ireland and jobs are scarce. Eilis Lacey's brothers have already left for England, and the decision has been made to send Eilis to America. Her sponsor, a parish priest in Brooklyn, has lined up a department store job and a boarding house room. Rose, her gainfully employed older sister, will remain at home with their widowed mother. Eilis has only the vaguest notion of life in America:
" It was a long journey across the Atlantic, she knew, at least a week on a ship, and it must be expensive. She had a sense too, she did not know from where, that, while boys and girls from the town who had gone to England did ordinary work for ordinary money, people who went to America would become rich." page 26
Though Eilis struggles, she gradually builds a life for herself in Brooklyn. A couple of years pass before a family crisis calls her back Ireland. Eilis must then choose between remaining in Ireland or returning to the life and love she has found in Brooklyn.
My thoughts:
Upon reading a summary, it would be easy to dismiss Brooklyn as just another immigrant story. But if given the chance, Toibin's writing, so rich with feeling, will draw you in. His simple, elegant, spare prose could easily have kept me listening to a book twice this length.
The reader, with her captivating Irish accent, was excellent, too. I was transported to 1950's Brooklyn - the sights, sounds, even the smells came alive. At times, I became very frustrated with Eilis and her passivity. Too much just 'happened' to her. I wanted her to take a stand, make a decision...something! Of course, in the end, she had to.
Why has it taken me so long to discover Toibin's work? The Master has been on my wish list forever and, a couple of years ago, I even brought The Blackwater Lightship home from the library. Unfortunately, it was due back before I had a chance to read it. You can be sure I won't make that mistake again!
Have you read Toibin? Can you suggest what to read next?
My rating: a solid A