Reviewing an audiobook is hard! I don’t have the physical book in front of me, there are no quotes flagged or written down in my notebook, and sometimes I don’t even know the correct spelling of a character's name. Although spelling wasn't an issue this time, it proved to be very problematic when I tried to write about China Road! All I have is my personal reaction to the story and the reader. When you add this to the fact that listening to a book is a very different experience from reading it (at least for me), I hesitate to even use the word ‘review’. So instead, here are some thoughts on a few recent audio books. 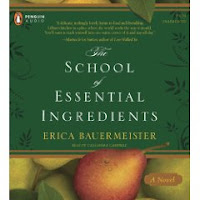 Once a month on Monday night, eight students gather in Lillian's restaurant for a cooking class. Over time, the paths of the students mingle and intertwine, and the essence of Lillian's cooking expands beyond the restaurant and into the secret corners of their lives, with results that are often unexpected, and always delicious.

I knew I was going to love this book even before I started listening. Molly and Les both raved about it and I've come to trust their judgement. The language was gorgeous; the reader’s voice was as smooth as butter. This was a perfect listening experience! My only complaint was that it was too short. The classes came to an end, but I still wanted more of each of these characters!
My rating: A+ 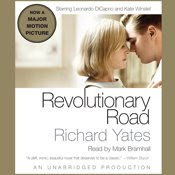 From the moment of its publication in 1961, Revolutionary Road was hailed as a masterpiece of realistic fiction and as the most evocative portrayal of the opulent desolation of the American suburbs. It’s the story of Frank and April Wheeler, a bright, beautiful, and talented couple who have lived on the assumption that greatness only just around the corner. With heartbreaking compassion and remorseless clarity, Richard Yates shows how Frank and April mortgage their spiritual birthright, betraying not only each other but their best selves.

Listening to this book was like a step back in time. New York City and its Connecticut suburbs of the 1950’s came to life. While I didn’t like any of the characters, I could not stop listening. Eleven hours passed very quickly! I missed the movie when it was at the theater, but will definitely watch when it becomes available through Netflix.
My rating: A 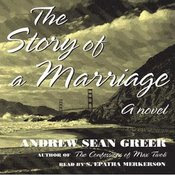 The Story of a Marriage: A Novel
by Andrew Sean Greer
Macmillan Audio, 2008
Narrated by: S. Epatha Merkerson
7 hours 23 minutes

Publisher’s summary:
“We think we know the ones we love.” So Pearlie Cook begins her indirect and devastating exploration of the mystery at the heart of every relationship: how we can ever truly know another person.
It is 1953 and Pearlie, a dutiful young housewife, finds herself living in the Sunset District in San Francisco, caring not only for her husband's fragile health but also for her son, who is afflicted with polio. Then, one Saturday morning, a stranger appears on her doorstep and everything changes. All the certainties by which Pearlie has lived and tried to protect her family are thrown into doubt. Does she know her husband at all? And what does the stranger want in return for his offer of a hundred thousand dollars? For six months in 1953 young Pearlie Cook struggles to understand the world around her, and most especially her husband, Holland.
Pearlie's story is a meditation not only on love but also on the effects of war, with one war recently over and another coming to a close. Set in a climate of fear and repression - political, sexual, and racial - The Story of a Marriage portrays three people trapped by the confines of their era, and the desperate measures they are prepared to take to escape it. Lyrical and surprising, The Story of a Marriage looks back at a period that we tend to misremember as one of innocence and simplicity.

The first-person narration, combined with the reader’s plaintive, deliberate voice made Pearlie come alive for me. Again, the 50's came to life...this time in San Francisco.
My rating: B+

My current audiobook is The Help by Kathryn Stockett and, so far, it's a winner!