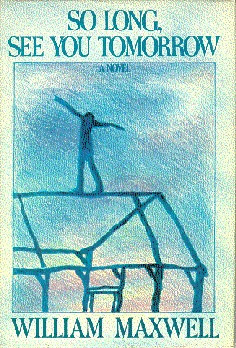 The gravel pit was about a mile east of town, and the size of a small lake, and so deep that boys under sixteen were forbidden by their parents to swim there. I knew it only by heresy. It had no bottom, people said, and because  I was very much interested in the idea that if you dug a hole straight down to anywhere and kept on digging it would come out in China, I took this to be a literal fact.

One winter morning shortly before daybreak, three men loading gravel there heard what sounded like a pistol shot. Or, they agreed, it could have been a car backfiring. Within a few seconds it had grown light. No one came to the pit through the field that lay alongside it, and they didn't see anyone walking on the road. The sound was not a car backfiring; a tenant farmer named Lloyd Wilson had just been shot and killed, and what they heard was the gun that killed him.

So Long, See You Tomorrow
by William Maxwell

I've never read William Maxwell and, in fact, had never even heard of him before I started blogging back in 2008. Sometime after that, Rachel began to rave about his work and I made a mental note to read him soon. "Soon", unfortunately, turned into five years. Last week, I stumbled upon this book at the library and brought it home with me. It's very short (less than 150 pages) and the writing is excellent. I'm enjoying it very much.


On an Illinois farm in the 1920s, a man is murdered, and in the same moment the tenous friendship between two lonely boys comes to an end. In telling their interconnected stories, American Book Award winner William Maxwell delivers a masterfully restrained and magically evocative meditation on the past.

Every Tuesday, Diane at Bibliophile by the Sea posts the opening paragraph (sometime two) of a book she decided to read based on the opening. Feel free to grab the banner and play along.
Posted by JoAnn at 6:00 AM