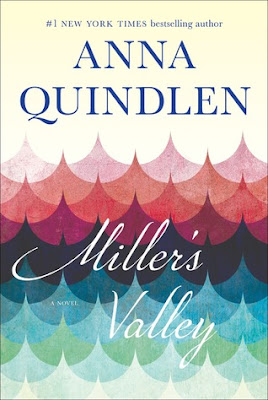 For generations the Millers have lived in Miller’s Valley. Mimi Miller tells about her life with intimacy and honesty. As Mimi eavesdrops on her parents and quietly observes the people around her, she discovers more and more about the toxicity of family secrets, the dangers of gossip, the flaws of marriage, the inequalities of friendship and the risks of passion, loyalty, and love. Home, as Mimi begins to realize, can be “a place where it’s just as easy to feel lost as it is to feel content.”

Miller’s Valley is a masterly study of family, memory, loss, and, ultimately, discovery, of finding true identity and a new vision of home. As Mimi says, “No one ever leaves the town where they grew up, even if they go.” Miller’s Valley  reminds us that the place where you grew up can disappear, and the people in it too, but all will live on in your heart forever.

Anna Quindlen and I go way back, probably to her 1980s New York Times columns, and I remember being pretty excited when she decided to try her hand at fiction in the 90s. Object Lessons  was one of the first selections of my fledgling book club (still in existence today) and I loved One True Thing.  But as wonderful as her fiction is, I've always felt that nonfiction is Quindlen's real strength. Lots of Candles, Plenty of Cake  is an all-time favorite and the only book I've ever purchased both a hardcover and audio edition on the same day.

Still, I'm always eager to read a novel by Anna Quindlen and jumped at opportunity to review  Miller's Valley. The book was a total pleasure to read from the opening paragraph of the prologue:


It was a put-up job, and we all knew it by then. The government people had hearings all spring to solicit the views of residents on their plans. That's what they called it, soliciting views, but every last person in Miller's Valley knew that just meant standing behind the microphones set up in the aisle of the middle school, and then finding out afterward that the government people would do what they planned to do anyhow. Everybody was just going through the motions. That's what people do. They decide what they want and then try to make you believe you want it, too.

... to the final sentences of the epilogue.

Quindlen's story-telling skills are mesmerizing and, as always, the writing is top-notch. Her main character, Mimi Miller, is likable, intelligent, and insightful. Add in a rich a cast of supporting characters (a case could even be made for including the rural Pennsylvania landscape here), a couple of long-buried family secrets, and a central environmental issue, and you've got one heck of a novel.

Miller's Valley, in my opinion, is a completely satisfying novel and Quindlen's best in twenty years. Don't miss it!