The Philadelphia Chromosome by Jessica Wapner 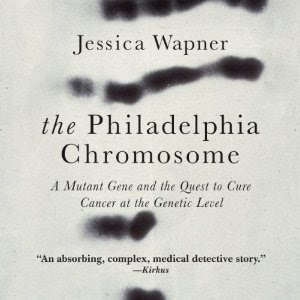 Publisher's Summary:
Almost daily, headlines announce newly discovered links between cancers and their genetic causes. Science journalist Jessica Wapner vividly relates the backstory behind those headlines, reconstructing the crucial breakthroughs, explaining the science behind them, and giving due to the dozens of researchers, doctors, and patients whose curiosity and determination restored the promise of a future to the more than 50,000 people diagnosed each year with chronic myeloid leukemia (CML). It is an astonishing tale that will provide victims of other cancers and their loved ones realistic hope that cures may yet be found in their lifetimes.

The Philadelphia Chromosome  charts the milestones that led to present-day cancer treatment and tells the inspiring story of the dedicated men and women who, working individually and in concert, have sought to plum the mysteries of the human genome in order to conquer those deadly and most feared diseases called cancer.

I loved this book... absolutely loved it!

Some of you know that in my previous life, I was a clinical pharmacist at a teaching hospital. We were involved in many drug trials, particularly for cancer and AIDS. This book brought back all the excitement, exhilaration, tedium, and frustration associated with those trials.

The Philadelphia Chromosome chronicles the research, discoveries, development, and clinical trials involved in bringing the revolutionary drug Gleevec to market. Gleevec represented a major breakthrough in the treatment of CML (chronic myelogenous leukemia) and basically transformed a death sentence into a more manageable disease.

Initially the book made my brain hurt. It brought back memories of organic chemistry, microbiology, biochemistry, and genetics. It jogged my mind to recall specific terms and principles I hadn't thought about in decades. But as soon as Wapner got to the medical part - hospital/patients/drug trials - I was in my element.

I am SO glad I listened to this book. The hard science at the beginning may have been too much for me in print, but once we got to the drug itself, the audio literally kept me up at night. {Go ahead, call me a nerd!} I can't even believe I'm saying a book like this was riveting, but it really was... especially in the second half as researchers/physicians were navigating the world of drug company politics and FDA protocols.

The Philadelphia Chromosome  will not be everyone's cup of tea, but I couldn't get enough.