The Girls of Atomic City by Denise Kiernan 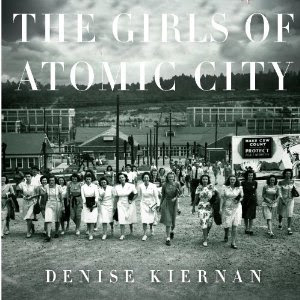 Summary (from IndieBound):
At the height of World War II, Oak Ridge, Tennessee, was home to 75,000 residents, and consumed more electricity than New York City, yet it was shrouded in such secrecy that it did not appear on any map. Thousands of civilians, many of them young women from small towns across the U.S., were recruited to this secret city, enticed by the promise of solid wages and war-ending work. What were they actually "doing" there? Very few knew. The purpose of this mysterious government project was kept a secret from the outside world and from the majority of the residents themselves. Some wondered why, despite the constant work and round-the-clock activity in this makeshift town, did no tangible product of any kind ever seem to leave its guarded gates? The women who kept this town running would find out at the end of the war, when Oak Ridge's secret was revealed and changed the world forever.

Drawing from the voices and experiences of the women who lived and worked in Oak Ridge, The Girls of Atomic City  rescues a remarkable, forgotten chapter of World War II from obscurity. Denise Kiernan captures the spirit of the times through these women: their pluck, their desire to contribute, and their enduring courage. "A phenomenal story," and Publishers Weekly  called it an "intimate and revealing glimpse into one of the most important scientific developments in history."

The Girls of Atomic City  is an interesting book covering a largely unfamiliar aspect of 20th century history. While I'd heard about The Manhattan Project and Los Alamos, NM, I did not realize that facilities in Oak Ridge, TN were not only instrumental in producing the atomic bomb, the entire city was created solely for that purpose.

Kiernan explores the history of Oak Ridge and development of the atomic bomb through the experiences of women who traveled to eastern Tennessee to "help end the war". These women were scientists, statisticians, nurses, machine operators, and custodians. Once in Oak Ridge, an air of secrecy prevailed. Workers knew their own jobs and nothing more. They were not privy to the overall goal or purpose of the facility. They were not allowed to talk about their work with anyone and letters home were heavily censored. In many ways, Oak Ridge can also be viewed as a social experiment of sorts.

The book started off slowly, but I became increasingly interested as the women were introduced. Overall, I enjoyed their personal stories much more than the technical workings of the plant. As I listened to the chapter recounting the day the first bomb was dropped, goosebumps covered my arms and tears filled my eyes.

As various agencies decide how to best commemorate (spin?) the role Oak Ridge played in the war, the official history remains unwritten. Thankfully, Ms. Kiernan was able to take advantage of many primary sources... an opportunity which is becoming increasingly precious as time passes.

This audiobook was narrated by Cassandra Campbell, a personal favorite. As always, her pitch-perfect delivery enhanced my enjoyment of the book.