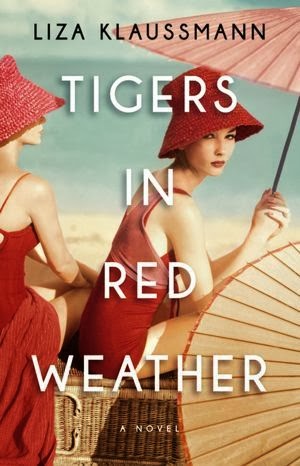 Summary (from goodreads):
Nick and her cousin, Helena, have grown up sharing sultry summer heat, sunbleached boat docks, and midnight gin parties on Martha's Vineyard in a glorious old family estate known as Tiger House. In the days following the end of the Second World War, the world seems to offer itself up, and the two women are on the cusp of their 'real lives': Helena is off to Hollywood and a new marriage, while Nick is heading for a reunion with her own young husband, Hughes, about to return from the war.

Soon the gilt begins to crack. Helena's husband is not the man he seemed to be, and Hughes has returned from the war distant, his inner light curtained over. On the brink of the 1960s, back at Tiger House, Nick and Helena—with their children, Daisy and Ed—try to recapture that sense of possibility. But when Daisy and Ed discover the victim of a brutal murder, the intrusion of violence causes everything to unravel. The members of the family spin out of their prescribed orbits, secrets come to light, and nothing about their lives will ever be the same.

Brilliantly told from five points of view, with a magical elegance and suspenseful dark longing, Tigers in Red Weather is an unforgettable debut novel from a writer of extraordinary insight and accomplishment.

This book has all the ingredients I tend to love in a summer/vacation read - beach house, family secrets, multiple viewpoints - but it was not as compelling as I'd hoped. Each section, narrated by a different family member, jumps around in time (the bulk of the action occurs between the 1940's and 1960's) and the reader is able to piece together events and fill in the blanks as the narratives unfolds. By the final section I was impressed with what the author had accomplished, but it seemed like it took too long to get there.

Overall, it was an enjoyable way to spend a couple of afternoons on the beach, but for a truly great summer read pick up A Hundred Summers instead.

My rating:
(an extra half star for the cover)

Bottom line:
Tigers in Red Weather is a good book with moments of greatness.
Posted by JoAnn at 7:53 AM