The Chaperone by Laura Moriarty (audio) 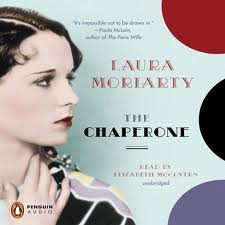 The Chaperone is a captivating novel about the woman who chaperoned an irreverent Louise Brooks to New York City in 1922, and the summer that would change them both.

Only a few years before becoming a famous actress and an icon for her generation, a 15-year-old Louise Brooks leaves Wichita to make it big in New York. Much to her annoyance, she is accompanied by a thirty-six-year-old chaperone who is neither mother nor friend. Cora Carlisle is a complicated but traditional woman with her own reasons for making the trip. She has no idea what she’s in for: Young Louise, already stunningly beautiful and sporting her famous blunt bangs and black bob, is known for her arrogance and her lack of respect for convention. Ultimately, the five weeks they spend together will change their lives forever.

For Cora, New York holds the promise of discovery that might prove an answer to the question at the center of her being, and even as she does her best to watch over Louise in a strange and bustling city, she embarks on her own mission. And while what she finds isn’t what she anticipated, it liberates her in a way she could not have imagined. Over the course of the summer, Cora’s eyes are opened to the promise of the 20th century and a new understanding of the possibilities for being fully alive.

One summer can change a life. For Cora Carlisle, it was the summer of 1922 when she chaperoned a young Louise Brooks in New York City.

The Chaperone is a remarkable novel not only for its sense of time and place (New York City and Kansas in the early 20th century), but for its portrayal of Cora's personal growth and development as she searches for her roots, comes to terms with a loveless marriage, and begins to forge a new outlook on life. Her initial narrowness and naivete eventually give way to broader understanding, acceptance, and eventual happiness.

There's no good lead-in, so here it is:  I didn't love Elizabeth McGovern's narration of The Chaperone.

In fact, as much as I hate to admit it, her voice actually put me off in the beginning. The vast majority of listeners rave about this production, but McGovern's 'normal' accent seemed (to me) precious and affected at times, while her Kansas voice was simply grating. Do people really sound like that in Kansas? I don't know. However, by the end of the second CD, I'd grown accustomed to her narration (it's a far cry from Downton Abbey, folks) and settled in to enjoy the story.

In the end, it was an average production of a superior novel.

Read or listen?
It's a toss-up. Either way, don't miss this book.