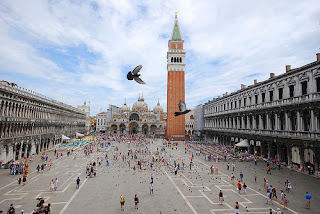 Short Story Monday, meet Venice in February. I'd been searching for stories set in Venice to share this month, when Audrey pointed me toward Edith Wharton. The story was exactly what I'd hoped for and Wharton, as always, was a pleasure to read.

"A Venetian Night's Entertainment" is a story Judge Anthony Bracknell liked to tell his grandsons. Ever since childhood, the mere mention of Venice had been like "a magician's magic wand" to the judge. His fascination stemmed from a print depicting a "busy merry populous scene" in St. Mark's Square.


"For here, by their garb, were people of every nation on earth, Chinamen, Turks, Spaniards, and many more, mixed with a parti-coloured throng of gentry, lacqueys, chapmen, hucksters, and tall personages in parsons' gowns who stalked through the crowd with an air of mastery, a string of parasites at their heels. And all these people seemed to be diverting themselves hugely, chaffering with the hucksters, watching the antics of trained dogs and monkeys, distributing doles to maimed beggars or having their pockets picked by slippery-looking fellows in black -- the whole with such an air of ease and good-humour that one felt the cut-purses to be as much a part of the show as the tumbling acrobats and animals."

As young Tony grew up, that image faded, but Venice still figured prominently in his dreams. All he learned in subsequent years seemed to "confirm its claim to stand midway between reality and illusion" - Venice still meant magic.


"It was the kind of place, Tony felt, in which things elsewhere impossible might naturally happen..."

Tony finally had an opportunity to visit Venice 1760, as part of his grand tour aboard the family's merchant ship. The story perfectly conveys the carnival-like atmosphere as, almost immediately upon arrival, Tony becomes an unwilling participant in a strange series of events involving a chance encounter with a beautiful young woman, an arranged marriage, misdelivered correspondence, and a chase. Tony is never exactly sure what is happening and, as a result, neither is the reader. This story was great fun! You can read "A Venetian Night's Entertainment" here.

Can you suggest other short stories set in Venice? 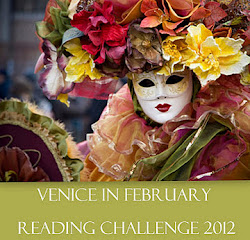