The Optimist's Daughter by Eudora Welty 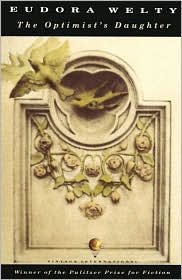 In a nutshell:
Winner of the 1973 Pulitzer Prize, The Optimist's Daughter is a quiet novel of self-discovery.

My thoughts:
After reading just one novel and a short story by Eudora Welty, I'm prepared to state with confidence that this author is all about her characters. Of course there is a plot, but it's the characters that will be remembered after the last page is turned.

In The Optimist's Daughter, the optimist is Judge McKelva and his daughter is Laurel McKelva Hand.  Laurel, a young widow living in Chicago, travels to New Orleans to be with her ailing father as he undergoes what is ultimately an unsuccessful surgery. Her mother is dead and the judge married Fay, a silly, self-centered woman younger than Laurel, shortly afterwards. Laurel and Fay return to Mississippi for Judge McKelva's funeral. Alone in her childhood home, Laurel arrives at an understanding of her parents, the past, and herself. That is the plot in its entirety.

What makes the novel a delight, is the manner in which we gradually get to know the characters.  Passages describing Judge McKelva's appearance allow a clear, detailed picture to form in the reader's mind.


He lay there unchangeably big and heavy, full of effort yet motionless, while his face looked tireder every morning, the circle under his visible eye thick as paint. He opened his mouth and swallowed what she [Laurel] offered him with the obedience of an old man - obedience! She felt ashamed to let him act out the part in front of her. p.22

The judge's personality continues to emerge even after his death.


"This is still his house. After all, they're still his guests. They're misrepresenting him - falsifying, that's what Mother would call it." Laurel might have been trying to testify now for her father's sake, as though he were in process of being put on trial here instead of being viewed in his casket. "He never would have stood for lies being told about him. Not at any time. Not ever."

"Yes he would," said Miss Adele. "If the truth might hurt the wrong person." p.83

Fay is presented as a frivolous, self-centered woman and, although her words had me both laughing and rolling my eyes in exasperation, the picture remained constant.


"What a way to keep his promise," Fay said. "When he told me he'd bring me to New Orleans some day, it was to see the Carnival." She stared out the window [of the hospital]. "And the Carnival's going on right now. It looks like this is as close as we'll get to a parade." p.13

Laurel completes a journey of self-discovery as she learns more about her parents, their relationship, the past, and herself. The writing, at times, was simply beautiful and I can't begin to share all the flagged passages.


The past is no more open to help or hurt than was Father in his coffin. The past is like him, impervious, and can never be awakened. It is memory that is the somnambulist. It will come back in its wounds from across the world, like Phil [Laurel's dead husband], calling us by our names and demanding its rightful tears. It will never be impervious. The memory can be hurt, time and again - but in that may lie its final mercy. As long as it's vulnerable to the living moment, it lives for us, and while it lives, and while we are able, we can give it up its due. p. 179

Novels that slowly unfold to give a clearer picture of characters and their motivations can be counted on to captivate me. The Optimist's Daughter did exactly that.

Bottom Line:  The Optimist's Daughter was a perfect introduction to the novels of Eudora Welty. Especially recommended for those who enjoy 'quieter' books.
Posted by JoAnn at 11:16 AM