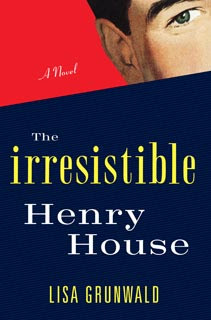 In a nutshell:
The Irresistible Henry House, set in the mid-twentieth century, focuses on the life of a 'practice baby' raised in a university home economics program.

My thoughts:
The opening sentence grabbed me right away:

"By the time Henry House was four months old, a copy of his picture was being carried in the pocketbooks of seven different women, each of whom called him her son."

Who knew there was such a thing as a 'practice' baby? A photograph of one such baby, supplied by a local orphanage to Cornell University's Home Economics Department 'practice house', inspired this novel. At Cornell, students learned various homemaking skills, including mothering. Babies were 'started' at the practice house and returned to the orphanage around the age of two ready for adoption.

Adopting a baby prepped at the university was considered eminently desirable. Cornell's program began in 1919 and continued until 1969. Other programs of this type existed at colleges and universities all over the country.

When Henry's practice baby days come to an end, Martha, the department chair, decides to raise him as her own son instead of sending him back to the orphanage. Henry moves upstairs with Martha, while a steady rotation of 'practice mothers' and 'practice siblings' continues downstairs. By the time Henry is in nursery school, he is aware that his life is unusual.

"As he knelt in the small space behind the couch in the nursery school, turning the page of We Come and Go, he allowed himself to imagine that he belonged in a place like Dick and Jane's, where when people left they came back, and they pretty much stayed the same." (page 80)

Eventually, Henry comes to resent Martha and their troubled relationship will continue into adulthood.

"Whether practice mothers or practice babies, everyone Henry loved eventually left and Martha - in a way that would take Henry years to see - seemed to gain strength from these departures and the role they gave her in his life." (page 103 - 104)

Henry leaves the practice house and enrolls in a boarding school for troubled children. Later he lands a job as an animator for Walt Disney, and eventually heads to London to work on the Yellow Submarine movie. Throughout this time, Henry continues to have difficult personal relationships.

"Henry was looking at Peace and finally seeing the unaffected indifference, the strident autonomy, the inability to trust in one person; seeing, unavoidably, the absolute worst in himself." (page 385)

I really enjoyed the historical details in this book. The Disney section had all sorts of interesting anecdotes on the making of Mary Poppins and The Jungle Book. Martha was given the opportunity to meet and converse with Dr. Spock at a conference. The 60's scene in London seemed very well done.

Book club reaction:
There were just six of us at the meeting, and only four finished the book. I seemed to be a little more enthusiastic than the others, maybe because this was such a nice change of pace from the classics I have been reading lately. I really thought there would be more of a discussion than we were able to muster... we seemed to have a hard time staying on topic.

Bottom Line:
The Irresistible Henry House is a well-written novel with a fascinating premise that hasn't gotten as much attention as it probably deserves.
Posted by JoAnn at 9:30 AM