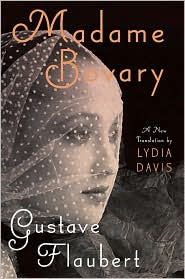 And so it begins. Frances from Nonsuch Book is hosting a group read of Madame Bovary by Gustave Flaubert to coincide with the release of Lydia Davis' new translation. The group is posting today about the introduction and Part 1, but I've decided to write about my past experience with the novel and offer a short translation comparison.

My first reading of Madame Bovary was in college. The semester, loaded with both organic chemistry and physics, was demanding. Near the end, and much to my current embarrassment, I resorted to SparkNotes. For the next 25 years, whenever Madame Bovary was mentioned, I felt a pang of nagging guilt.
In 2005, an online classics group that I co-owned chose to read Madame Bovary and provided an opportunity to finally assuage that guilt. My Vintage Classic edition featured Francis Steegmuller's 1957 translation. This time I read the book in its entirety, but still felt surprisingly neutral.
And here we are. It's interesting to read a novel when you are already familiar with the plot. The main focus is no longer on what happens next, and closer attention can be paid to other details. Normally, I would not consider a reread so soon, but group reads are far too tempting- plus I am fascinated by translation.  Whenever multiple options are available, I always read a chapter or two of each before choosing. Even so, I wonder what I am choosing. How can I possibly evaluate which one is closer to the author's actual writing style? Is my choice based solely on current language usage and readability?
Beginning Madame Bovary for the third time, I am especially interested to see how the translations differ. Here are the introductions of young Charles Bovary.

First, Steegmuller's translation from pages 3 and 4:

"The newcomer, who was hanging back in the corner so that the door half hid him from view, was a country lad of about fifteen, taller than any of us. He had his hair cut in bangs like a cantor in a village church, and he had a gentle, timid look. He wasn't broad in the shoulders, but his green jacket with its black buttons seemed tight under the arms; and through the vents of his cuffs we could see red wrists that were clearly unaccustomed to being covered. His yellowish breeches were hiked up by his suspenders, and from them emerged a pair of blue-stockinged legs. He wore heavy shoes, hobnailed and badly shined.

We began to recite our lessons. He listened avidly, as though to a sermon - he didn't dare even cross his legs or lean on his elbows; and at two o'clock, when the bell rang for the next class, the teacher had to tell him to line up with the rest of us."

Now, the same passage from Davis:

"Still standing in the corner, behind the door, so that one could hardly see him, the new boy was a fellow from the country, about fifteen years old, and taller than any of us. His hair was cut straight across the forehead, like a village choirboy's, his manner sensible and very ill at ease. Although he was not broad in the shoulders, his suit jacket of green cloth with black buttons must have pinched him around the armholes, and it showed, through the vent of its cuffs, red wrists accustomed to being bare. His legs, in blue stockings, emerged from a pair of yellowish pants pulled tight by his suspenders. He wore stout shoes, badly shined, studded with nails.

We began reciting our lessons. He listened to them, all ears, as attentive as though to a sermon, not daring even to cross his legs or lean on his elbow, and at two o'clock, when the bell rang, the teacher was obliged to alert him, so that he would get in line with us."

So will this new translation allow Madame Bovary to 'speak' to me in a way it never has before? We shall see...
Visit Frances for the list of participants and links to their posts.
Posted by JoAnn at 5:40 PM